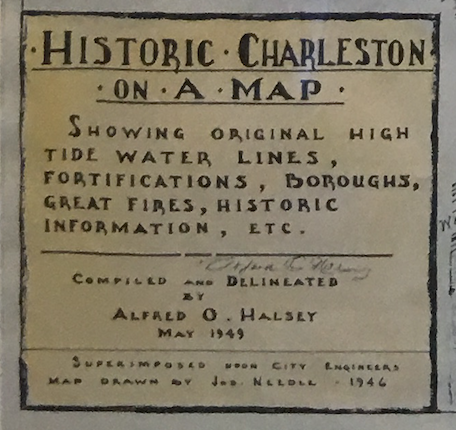 When my mother was a little girl, she vividly remembers the days when her Poppy let her join him at work in his attic-style cartography studio in Charleston, South Carolina. Poppy, known to the rest of the city as Joseph Needle, was a Civil Engineer and my great-grandfather. As listed on the Charleston government website under the “City Engineering Records from 1867-1979,” Joseph’s work entailed “providing essential public services to a growing populace” (charleston-sc.gov).

Considering that he held this occupation before, during, and after the Great Depression, his job was one of absolute importance. Although my mother, born in 1960, was able to witness his designing skills following the Depression, I’m willing to bet that the excited young girl that played with erasers in her grandfather’s cartography studio had no idea of the magnitude of what the man had already accomplished.

Joseph Needle’s position within the Engineering Division focused exclusively on city planning through the creation of maps and outlines of future designs. There is no way of telling how many sketches and maps Joseph created throughout his career, but one in particular has remained in close possession of the little girl that grew up admiring her Poppy’s skills with such outward affection. Astoundingly, seventy-two years after it was originally drawn, one of Joseph Needle’s signature maps hangs next to the front door in our house in Atlanta, Georgia.

Used as a constant reminder of where our family has been, as well as who has paved the way throughout our collective journey, this specific map highlights all of Charleston in the year 1946. Including original high tide water lines, historical battles, significant weather events, and even a list of past governors, every inch of the map reveals small details about what my great grandfather felt was important to share with the rest of his hometown almost halfway through the twentieth century.

During the Great Depression, regardless of the economic turmoil taking place, the state of South Carolina kept an optimistic mindset of the future. In the 1932 Presidential Election, a record-setting 98% of the state voted for Franklin D. Roosevelt, who they believed would take the right steps towards reviving the country of its troubles. Soon after his election, the New Deals were put into place, such as the Public Works Administration, where my great-grandfather was able to leave his mark. Helping to design schools, playgrounds, and shipyards, Joseph Needle utilized the assistance of federal aid to directly give back to his city. As evidenced by the various plans that he sketched, Joseph’s work was not limited to one idea, but rather, a grander plan for improvement.

Tara Mielnik, in New Deal, New Landscape: The Civilian Conservation Corps and South Carolina’s State Parks, praises the local creations in Charleston during the Depression, saying “these visual legacies should remind South Carolinians and visitors of the impact of the New Deal within the state” (Mielnik). I couldn’t be prouder to know that one of my direct relatives was involved in such a proactive project during an incredibly tough era.

For most Americans living during the 1930s, food, clothing, and other basic necessities were scarce. Joseph Needle, who would later serve as the premier City Engineer of Charleston from 1953-1957, was among the luckiest citizens in the Southern region of the United States, who not only had a job that provided basic necessities to his family, but also was in the position to bestow a sense of direction for those around him. Today, 39 years after his death, his legacy lives on in his grandchildren and great-grandchildren, most notably within a house six hours away from his former home, where one of his infamous maps continues to give a little girl reason to admire her Poppy.