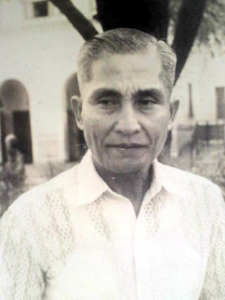 Katie Elizabeth Wright is the wife to Willie Ferrell and my great grandmother. She was born in 1899 in Tennessee, but moved to the Athens area where she shared a farm a family with Willie during the great depression. Mother of five, she represents the steadfast mother of the era stubborn in her desire to see her children raised and well cared for in the rural south.

Edward Dean Stetson was born August 30, 1917, in Arbuckle, CA. He lived here on an almond ranch with his family for the entirety of his childhood. Following this, he went to college in Sacramento and would spend the rest of his life there. He went on to become a civil engineer working for the California Department of Water Resources. He was married to his wife Phyllis for 61 years. He had 6 children, 11 grandchildren, and 4 great-grandchildren.

Henry Cecil “Buck” Simmons was born on August 10th, 1898 in Vinegar Bend, Alabama, a small village in Washington County, Alabama. Vinegar Bend is now only an unincorporated census-designated place, a location that is only recognized on the census because both it’s population and area are too small. He married Beulah Monk Simmons in 1919, when he was 21 and she was 18. Post-depression, they lived together in Prichard, Alabama, a city in Mobile County where they had four kids (Cecil, Marvel, Burton, and Robert). He was a barber most of his life. They eventually moved to Mobile city, where he died on February 10, 1969.

Alonzo Vickers was born on May 3, 1892, in Lawrenceville, Alabama, and passed away in late April of 1980. His parents were slaves and he was born a sharecropper. He would go on to get married, have children, and own his own farm.

My great-uncle George lived here up to World War II. He later went on to fight on the Western front of the war. 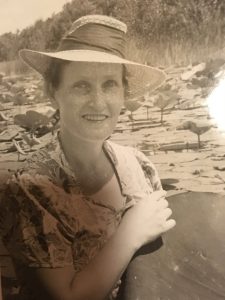 Born in Nebraska in 1910, my great grandmother lived at home with her family until her she turned twenty. In 1930, she moved to Sioux City to begin her life as an adult. In Sioux City Clara worked at the hospital kitchen where she washed dishes for the cafeteria, along with many other various jobs. She lived as a bachelorette until she married Roy Troutman in 1936. Two of her three children were born in the house Clara and her husband owned in Sioux City. Caldonia Athalee Strahan was born on December 12, 1918, in Hancock, Mississippi. Technically she lived in Pearlington; however, Hurricane Katrina  wiped it off the map. After a mysterious event in which the courthouse holding her birth documents was lost to a fire, she changed her name officially to Dona A. Strahan. Later in life, she would relocate to bustling city Mobile, AL, with her husband and live the rest of her life there.

Catherine Margaret Korytoski Miller was born somewhere in Illinois in 1911, though most of her life was spent in and around Porter, a small town in Northwest Indiana. The oldest of six children, Kate married Frank Miller, a painter by trade and artist by hobby, in 1934 and moved to another house in Porter on Franklin Street. Due to family financial troubles, though, by 1940, the Millers (Frank, Kate, and three of the four children they would have: Joanne, 4; Nels, 3; Margo, 11/12; Helen, not born until 1943) lived in Porter at 119 Beam Street instead with Kate’s parents, her five siblings including her oldest sister Mary, Mary’s husband Charles Meyne, the two Meyne children, and a paying boarder to make ends meet. Kate kept home with Mary’s help and took care of this hectic household of sixteen until they could afford to live separately around the Porter area, perhaps preparing her for life in the next decade when Frank would be drafted into the Navy.

Burly “BB” Bascum Norris was born in Andalusia, Alabama, on October 11, 1922, and passed away on May 26, 2001. BB held many roles in his life of 79 years. He was a fireman, fire chief, WWII veteran, father, brother, and my great-grandfather. He spent many years of his life at the Andalusia Fire Department in Andalusia, Alabama, where he retired from his duties as Fire Chief in 1982.