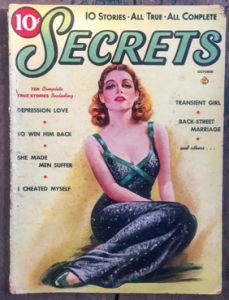 Secrets is a 122-page magazine (8 1/2″ x 11 3/8″) published in October 1938. This copy was obtained on Etsy and was not housed in Hoole Library. This magazine is a similar concept to Cosmopolitan magazine that would be found today. It appears to include antidotes and advertisements that appeal to a ‘powerful’ woman and to empower those reading. The cover promises 10 true

stories that include “Depression Love,” “To Win Him Back,” “She Made Men Suffer,” “I Cheated Myself,” “Transient Girl,” and “Back-Street Marriage.” All the stories inspire a confidence that aligns with the revolutionary role women started to take in the 1920s with the emergence of the scandalous, pin-up girls. Two ads are included. One ad is for “Maiden Form’s Chansonette” and the other is for Maybelline. The former is a new bra that is advertised by saying “smart moderns are demanding subtle ‘pointed roundness’ of bosom.” The ad appeals to modern women looking for a new, revolutionary look. The Maybelline ad is depicted using the times’ “Miss Typical America” as its face. The ad tells readers that Maybelline helped “Miss Typical America” “win Hollywood career.” It lets people know that if they want to reach this standard of beauty, Maybelline will help them get there.

This magazine is tailored towards women who are interested in maintaining the typical ‘housewife’ lifestyle. It gives women real-life products and advice on how to deal with situations in their marriages or relationships. It is not necessarily ‘useful’ in a typical way; however, it is useful because it provides insight that builds up women and continues to progress the modernism of women and their attitudes. The advertisements may not be the most helpful to every day women as a new bra and makeup may not be the most feasible purchase for women during a time of financial hardship. The magazine, though, is useful to researchers and academics interested in the evolution of feminist identity and women’s ideals during this era. It clearly demonstrates a significant step forward for women of this time.