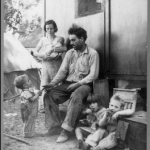 In September of 1935, FSA photographer Dorothea Lange captured this moment between a struggling father and his surviving family in Marysville, California. The community where this family resided was mainly composed of

migrant farmers as well as travelers from all over the country craving a better life. The photograph depicts the Great Depression in numerous ways. First, it shows three young children and an infant, the clothes that they are wearing are evidently dirty: this family – along with others – faced times so rough that they cannot even afford to have clean clothes on their backs. The children not owning clean clothes or shoes further indicates their lack of wealth since they were not able to obtain basic necessities, rather it was considered a luxury for families. Furthermore, the young boy looking up to his father provokes a sympathetic feeling to audiences because not only the little boy, but the entire family, depends on the father for a slight hint of hope for a better life. The little boy’s hopeful eyes matched the strain in his father’s eyes shows how motivation depends on the innocent; with the young boy and his siblings, durability for the father is a battle that is worth the fight. A final noteworthy component to observe is the situation that the family had to live through; although they congregate in front of a wooden building, the tents in the background were occupied by other struggling families that are desperate to feed their starving children. Being a farmer in the Great Depression was a hard task, indeed, the price of crops fell so low land owners were not able to keep their fires warm with coal, so they used their own crops as fuel for heat. Yet, Dorothea Lange captures this moment that demonstrates that no matter how tough times were during this shocking time in our country, families were still fighting the biggest fight man-kind has endured for centuries: survival.