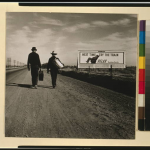 following World War I. Riding trains and even owning cars were luxuries that people saw as ordinary parts of life.  Looking at this picture from a 1937 perspective, however, shows how much everything changed during the Great Depression. Two men holding bags appear to be leaving whatever place they called home in order to go out and find work. The usage of contrast  is what initially grabbed my attention when viewing this image, a tool which helps convey the message that one specific location can significantly change when viewed from two separate points in time. Unfortunately for so many people, this change of reality happened all too quickly, leaving them with no choice but to pick up their lives and move elsewhere.