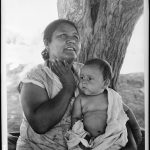 “Sometimes I tell my children that I would like to go to Mexico, but they tell me ‘We don’t want to go, we belong here.'” (http://www.loc.gov/pictures/resource/fsa.8b26837/?co=fsa) , or as I like to call it, �Chubby Jesus� is a picture we rarely see in the discussion of the Great Depression. In a theater of dirty white children and gaunt face fathers next to stern, tight lipped mothers, we have something that approximates… hope? The first thing to catch my eye was the face of the mother in this

picture, looking into the distance, but not, despite the title, towards Mexico, but towards the future of her child while the child looks in the other direction, eyes locked on candy probably. The angle of the photograph produces so much, it immediately brings to mind images of the Madonna, holding tight her slain son who was just lifted from the cross. The backdrop of the photo denotes a certain barren feel, a dry tree in the wastes, and even brings to mind the images of Jesus preaching to the multitudes in the story of him multiplying fish and bread. The clothes we see don’t hamper this image, the mother looks as if she’s wearing a blanket she may have fashioned into a dress, years ago, the baby looks as if hes wearing what was left of that blanket.
But the photographer has crafted an image, yes draped in humility, but surrounded by a pleasant glow. There is no gaunt, longing in the eyes of these two, there is no grasping at the desperate nature of the situation. There is a tree, and a mother, and a baby sitting together in love, with life in their eyes. The decision not to have shacks or thrown together tents in the background leans towards the view of possibility as mirrored in the mother’s gaze. They are a blank slate marred only by the title, perhaps a want of what is familiar, but the baby, like Jesus, submits that salvation is in the perseverance of hope.