My step grandfather, William Kyle Thurmond Junior, was not unfamiliar with the feeling of want during his childhood, but he and his father managed to find a beneficial escape from the trying times of the Great Depression through the sport of outdoor fishing. Born right at the cusp of America’s greatest financial crisis in December of 1930, he was the youngest of William and Ethel Thurmond’s two children, with their first—Virginia Fay— being born in October 1926. The family owned a home right off of State Highway 76 in the oil-driven Healdton community of Carter, Oklahoma, where his father worked as a Gas Flight Engineer. Although the stock market crash in 1929 had a devastating effect on their family’s financial status, many Oklahomans were able to afford hours of leisure at state-managed reservoirs, given that the sport of fishing produces a bountiful, eco-friendly source of meat.

I find it interesting that the Oklahoma Historical Society gives examples of various recreational pastimes that the local children used as an escape from the harsh conditions of the Great Depression, including a “big fish fry”. Oklahoma children would use mallets to pound weeds, later used to poison a damned section of a creek, so that “by the late morning the fish would rise to the top of the water,” allowing the children to secure any floating fish with “gigs, spears, and pitchforks” for a communal dinner later in the evening. This type of activity was especially routine for my grandfather, who eagerly took any opportunity to cast his homemade reel. 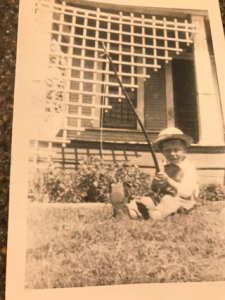 His father a found scrap pieces of wood to make his first rod, and a long, twine string tied to at end for the fly. I can imagine him awaiting his father’s arrival home from work in the oil fields so that they could embark on an escape to one of the four hatcheries in Oklahoma, hopeful to experience the thrill of reeling in pounds of fish. Going on weekend trips to pass the time by sinking a baited hook into creeks became his most beloved hobby throughout the course of his life. This is evident from his large collection of fishing gear and tackle boxes—containing hooks, tools, and line—that he left behind after his death in 1996, as well as several photographs that capture his various fishing expeditions throughout his lifetime, often attended by my father, who then eventually bequeathed my grandfather’s passion for the sport onto me. 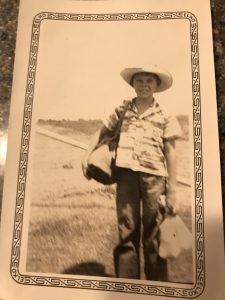 Any family member that recalls my grandfather’s legacy would emphasize his lifelong affinity for fishing—all the outdoor weekend retreats became a seemingly annual tradition as he often brought his children along to learn and admire moments of leisure. According to Kenneth Williams, Oklahoma suffered from drought conditions in the 1930’s that sparked families to build small farm ponds to help prevent wildfires and foster biodiversity. [Photo 3 and 4]. Williams estimates that “a typical Oklahoma pond is one-fourth to ten surface-acres of water in size and produces an average of 341 pounds of fish per acre”. Eventually, these ponds became a common resource in Oklahoma, thereby making the sport of fishing common practice for Depression-era families. Bamboo was the most popular material used for fishing rods up until the 1950’s, and despite the economic downfall the fishing industry remained successful since even the unemployed invested in equipment as a resourceful way to provide for their families. The lures were constructed from either wood or bucktail, and the string for the fly could be made from any durable resource, including horse tail hair.

When money is scarce and difficult times become hard to escape, as in the Great Depression, many families like my grandfathers found it necessary to make time for relaxation in a way that wouldn’t compromise survival, such as fishing. With resourcefulness being a vital characteristic during the 1930’s, it was especially critical that men provide income, food, and shelter—making it seemingly impossible for middle class citizens to indulge in moments of relaxation in such a crisis and significant to the ironically ample opportunities to fish. Given that the sport inherently includes access to nutrients and a free supply of meat that is gained from the amount of fish that is caught during the activity itself, collected, many low-income families were able to find pleasure in the quiet nature of fishing. While my grandfather certainly suffered through the harsh conditions produced during the Great Depression, he relished the leisurely act of fishing that was commonly practiced by Oklahomans during this time.