My great-grandfather, Emmett William Rossiter, was born January 15, 1888, in Bancroft, Nebraska. In 1932 he lived in Walthill, Nebraska, with his wife June and his eight children: Claude, Constance, Vincent, Mary, Constance, June, Joan, and Anne. He was a bank cashier and still employed at this time at Bank of Winnebago.

Before he was a banker, he worked for The Chicago Publisher in Illinois and published several pieces of music that are now saved in the special collections library at The University of Iowa. In his mid-twenties, he went by the name Will, a shortening of his middle name William. Rossiter published twenty to thirty songs in his short career as a publisher for musical artists. A Music Publisher’s purpose during this time was to manage and collect royalties for its copyright properties and help artists improve their overall technique and properly expose their music to the world. These songs are important because they’re reflections of people during this time and what their lives were like. The cover of each sheet of music also includes historical pictures or paintings of the person or item the song is about. Some of the song covers are racially controversial, such as “ Cannibal Love”[Figure 1] and “Big Chief Dynamite” [Figure 2].

During the Great Depression, Chicago was the center of popular song publishers. As a college graduate from the University of Iowa, Will Rossiter published music in the heart of Chicago before moving back home to Nebraska to raise a family. He was fortunate enough to stay in business and support his growing family during this time.

Three of his greatest published songs were “I wonder, where my easy rider’s gone?” “ In the Garden of Memory,” and “Mammy’s Shufflin’ Dance.” Music never died, not even in the Great Depression, especially swing, folk, jazz and big band music. These genres of music brought joy, were a form of self-expression, and provided jobs for publishers, writers and singers during the thirties.

“ I wonder, where my easy rider’s gone?,” published in 1929 [Figure 3], is a “Hard-Luck” racetrack story with words and music written by Shelton Brooks and published by Will Rossiter. This musical piece includes instrumentals of piano and voice; it is a “strophic with chorus” composition and it’s topics are listed as”African Americans, Caricatures, Horse racing, Gambling, Courtship, and love.” The cover shows a white man racing on a black horse and a black man racing on a white horse with a crowd full of wealthy white folks. The song is about a woman named Susan who bets money on a racer named Jockey Lee, but Jockey Lee’s horse doesn’t show up, so Susan wonders where her easy rider has gone.

“In the Garden of Memory,” published in 1929 [Figure 4], has a song cover with a blond woman by the beach; she has a small garden of flowers displayed in her hair and she is sitting on a fancy white bench. The lyrics are by Beth Slater Whitson, music by Harry I Robinson, and published by Will Rossiter. The song features a man singing about his lost love and how she still exists in the garden of his memory where there is only bliss 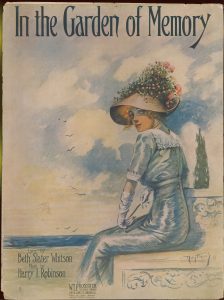 Figure 4: In the Garden of Memory

“Mammy’s Shufflin Dance,” published in 1930 [Figure 5], was supposedly the sensational hit of the season and displays a picture of women in a large hat with a caption underneath that says, “This song you’ll find at the up-to-date 10 cent stores–if not send 25 cents in stamps directed to the publisher, Will Rossiter.” This song is racist and “a Mammy” referred to a heavier black woman. The song also uses other degrading words such as “darkies” and is not sensitive to African American Culture

Will Rossiter would be considered one of the lucky ones during the Great Depression. After having a successful music publisher career, he became a banker and provided financially for his family in Nebraska. His family wasn’t wealthy but he made enough to support all eight children and put them through college following the Great Depression. He was educated and knew what it took to support himself and his family.

The Role of the Music Publisher. Copyright 2005 by Keith Holzman Soulutions unlimited. http://www.musicbizacademy.com/articles/kh_musicpublisher.htm