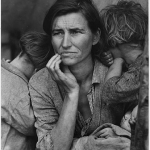 woman and her 3 children, all of which have hidden faces. The mother’s expression is the forefront of the picture with a straight on shot, placed in black and white. We can see her two older children hiding their faces from the camera, implying a sense of embarrassment or shame. From the way the picture is taken and the fact that the children were allowed the time to hide their faces if they wanted to, the viewer can tell that the photographer both engaged with the subjects and wanted to depict true emotions of the subjects. The image is simple which inspires a sense of truth. We can see the emotions in the woman’s face and we can feel the hardship that she clearly has undergone. The black and white film intensifies the dirt that lies on the clothes and bodies of the people in the photo and the fabric of the background. They are clearly in some kind of camp, perhaps a tent, with limited utilities because this is all they can afford. The woman, presumably the mother of the children, feels distraught, perhaps wondering how she will feed her children and doing her best to take care of them.

When I first saw the image, I could not help but feel the pain the woman feels. It took me a while to notice that the woman was holding a baby in her arms. Her two children who are older are hiding their faces on their own, yet the baby is too small to hide his or her own face so the mother shields his or her body completely from the camera on her own, as if shielding the baby as much as she can from the events going on. The image does a superb job of relating the emotional hardships and destruction that this time caused. It will be a permanent reminder of this time and the impact that it held on those experiencing it.